We spoke with alumna Elizabeth Minnigin about her time at Hughes Hall, and how this led her to a career teaching in schools around the world.

Elizabeth studied for her PGCE at Hughes Hall in 1982/83, but a path in education wasn’t always her plan. Prior to moving to Cambridge, she had to choose her vocation – education or nursing. Having been already offered a place at the Nightingale School of Nursing, Elizabeth then received her offer to study for a PGCE at Hughes Hall, University of Cambridge.

When talking with Elizabeth about this choice, she says that it was the content of the course at Cambridge that ultimately decided for her. The Cambridge curriculum, unlike others, allowed her to explore not only the history of education, but included content on international and multicultural schooling. Knowing that she wanted to continue exploring the world, she chose Hughes Hall.

With her PGCE complete, she now faced another difficult choice – to commence her training at the Nightingale School of Nursing, which had kept her place for her, or accept a position on a UNICEF project for the education of women and girls in Nepal with the Voluntary Service Overseas (VSO). Her adventurous spirit won, leading her to spend two years in Nepal teaching and promoting education for girls.

These two years in Nepal were full of unexpected challenges. Firstly, she had hoped to go to China on her placement but was instead placed in Nepal. Then, despite being contracted to teach English as a second language to college students, Elizabeth found herself with 85 children in a small classroom across a range of ages, with a small blackboard and some chalk, needing to adapt her teaching style rapidly. When not teaching, Elizabeth trekked to villages in western Nepal to promote the UNICEF project and educational grants for women and girls to receive or continue their education.

Elizabeth even found herself providing limited healthcare in times when there was no local doctor available, including in a leprosy and tuberculosis hospital where she was trained to give injections to patients. One of her patients was a student at the school where she worked. For Elizabeth, her role as a teacher was not confined to the classroom but encompassed a holistic view of each student that took note of their cultural background, unique challenges, and their physical and mental wellbeing. Adaptability and personalised care became entrenched in her approach to her work.

Since her time in Nepal, Elizabeth has worked across the world, including in the Isle of Wight, Saudi Arabia, Hungary, Germany, Switzerland, France and now Togo. Although the places where she has worked have been very different, she has always taken the lessons learnt at Hughes Hall and  in Nepal with her.

While completing a postgraduate course in pastoral education and care with the British Boarding School association and Roehampton University, Elizabeth worked to support students with learning difficulties to find personalised approaches to their study, raising her students’ academic performance, but also more importantly, their self-esteem. She reflects on her time working with one such student who had failed his IGCSEs twice, leaving him frustrated and lacking in confidence. She worked with him to identify one of the causes of his anxiety, finding that he forgot to eat when experiencing stress while studying, which then in turn made him lose concentration and feel angry. One of the strategies Elizabeth used to help him overcome this negative cycle of behaviour, was to set timers on his laptop to remind him to eat nutritious snacks such as dried fruit and nuts and drink water during revision time. This resulted in much calmer and more focused preparation for his exams and the outcome was that he passed them all and was accepted as a helper on one of the Camp America teams.

Her personalised approach to education is also reflected through her family life. Elizabeth’s five children studied for different qualifications, with some completing A Levels and others the International Baccalaureate. Now grown up, they are all successful in a diverse range of careers: Maths Teacher, Ocean Scientist, English Teacher, Product Design Engineer, and Social Anthropologist. 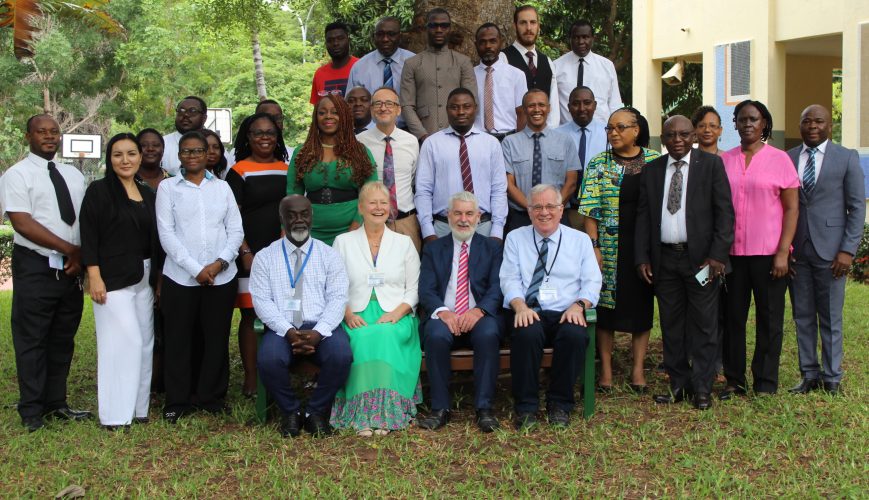 Elizabeth and the staff team at the British School of Lomé in Togo.

Today, Elizabeth is continuing her journey as the Head of School at The British School of Lomé in the French speaking country, Togo, West Africa. The British School of Lomé is a Round Square school that holds experiential learning and service to others as core values. The school is hosting the first British educational conference ‘Education: Past, present, and future’, in Togo this December. Most recently, since Togo joined the Commonwealth, Elizabeth has been approached by the Togolese Ministry of Education to work with them in planning their strategy for improving the delivery of the English Language curriculum throughout the country.

Reflecting on her life, Elizabeth notes throughout all her experiences, the impression of her time spent studying at Hughes Hall and the valuable lessons she learnt there, which served to strengthen and prepare her for the way ahead. The Post Graduate course she studied, valued international, multicultural, and personalised education. The people she met encouraged her to explore the world, leading her to Nepal where she learnt so many formative lessons. Her PGCE at Cambridge provided the basis for her approach to education, and to her life, allowing her to pursue her unique path. 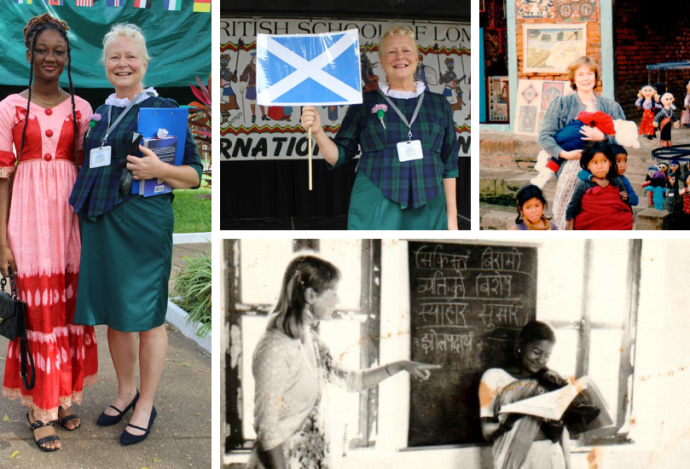