College Associate and course supervisor, Dr Alex Reid, features in an upcoming episode of BBC 2’s Surgeons: At the Edge of Life.

The highly acclaimed documentary series begun in 2018 and spotlights some of the world’s most advanced surgery, with series 3 and 4 focusing on the life-saving work at Addenbrooke’s and Papworth Hospitals, in Cambridge. Episode 6 of Series 4, will air on Thursday, 16th December at 9pm, with scheduling information highlighting Alex’s life-saving expertise:

“The major trauma team in Addenbrooke’s are up against the clock to treat some of the country’s most critically injured patients. Chef Adrian is rushed to hospital in the early hours of the morning after crashing his motorbike at high speed, trapping his arm between the crash barrier and impaling his abdomen with a piece of metal. Having lost a third of his circulating blood, Adrian is in a critical condition when he arrives in the trauma department’s resus bay…all attention turns to his arm and hand, which are so badly mangled that his hand is potentially beyond repair. Emergency surgeons assess the arm and rush Adrian to theatre so that consultant plastic and hand surgeon Alex Reid can explore the extent of the damage.”

Although unaccustomed to the television cameras at work, Alex was pleased to feature on the programme: “The last two series have followed a number of emergency procedures carried out some of my colleagues in Cambridge. Hand surgery isn’t often a headline-grabber so it was gratifying – and exciting – for the producers to explore our team’s work this time. What the NHS does in the field of plastic surgery and limb surgery is utterly transformative for those suffering life-threatening and life-altering trauma.”

Alex is a Fellow of the Royal College of Surgeons and a Fellow of the European Board of Hand Surgery.  He is a Consultant Plastic and Hand Surgeon at Addenbrookes Hospital, training extensively in plastic surgery and hand surgery before becoming a Consultant in the NHS. He has undertaken Fellowships in Aesthetic and Reconstructive Surgery at the London Clinic; and in Skin, Complex Reconstruction and Hand Surgery at the St. Andrew’s Centre for Plastic and Burns Surgery.

The BBC 2 website explains why they chose Cambridge for their most recent series: “Addenbrooke’s and Royal Papworth hospitals in Cambridge are renowned for the expertise of their surgical staff. At both centres, surgeons undertake some of the most complex operations in the world, where technical skill is paramount because even the smallest slip of the scalpel would result in catastrophe.” The Addenbrooke’s website looks at previous episodes and the individuals featured in Surgeons.

In 2020, Alex was awarded the Excellent Teaching Award from the Cambridge University Clinical School and Society. He is a member of the Faculty of Surgical Trainers (Royal College of Surgeons Edinburgh) and faculty member on several specialist courses. In 2021, he was appointed as an Honorary Lecturer at University College London.

At Hughes Hall, Alex Reid is an undergraduate course supervisor in Anatomy (MVST 1A). 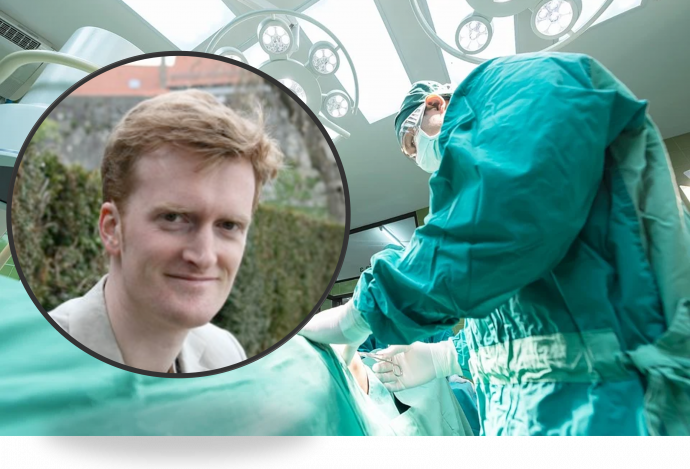