Is it feasible to convert the masses of plastic waste in the seas into a fuel for the very ships retrieving it?

Professor Nikolaos Kazantzis, Senior Member of Hughes Hall, is part of a research team based in the US that received a major grant to investigate this proposition.

The dangerous impact waste plastic in our oceans has on marine life and ecosystems, as well as the potential implications on the animal and human food chain, are increasingly well known. Every year between 4.8 to 12.7 million tons of plastic are released into the seas and form huge plastic islands in the oceanic gyres, the large systems of rotating currents.

Current clean-up operations are complex and energy intensive, and have never been systematically and fully evaluated. They often involve numerous vessels making lengthy voyages to the artificial booms capturing the plastics. The ships collect and store the plastic waste and then transport it back to port, where they unload and refuel. Apart from the economic and energy costs of this approach, it is estimated that such clean-up operations will take decades rather than years. This timescale means that environmental degradation may break down the existing marine-borne plastics into smaller fragments and microscopic pieces before they can be harvested. One of the major challenges therefore, is to find a system for removing the waste faster than it degrades.

A team of researchers at Worcester Polytechnic Institute (WPI) in Massachusetts has received a prestigious two-year $259k grant from the National Science Foundation’s (NSF) 2026 Idea Machine competition. This was awarded to advance the design and implementation of next-generation technologies to address the global problem of marine plastic pollution. The WPI’s interdisciplinary project, ‘Probabilistic analysis of converting marine-borne plastics into usable fuels’, is led by chemical engineering professors Nikolaos Kazantzis and Michael Timko.

Nikolaos outlines the adventurous thinking behind the research. ‘For the first time we are exploring the feasibility of the onboard conversion of marine plastic waste into ship fuel in a scientifically comprehensive way. The funding will enable us to assess the technical and economic viability and carry out the appropriate scientific analysis.’

‘Our research team is modelling a specialised reactor that converts harvested waste plastic using an innovative chemical process called hydrothermal liquefaction (HTL). This compresses the plastic at high temperature and high pressure into “blue diesel” (the name emphasises its marine origins). This blue diesel could then be used by the ships themselves, enabling them to stay at sea for longer, eliminating the need for numerous return visits to port to unload and refuel, and amongst other outcomes, saving time, fossil fuels and money.’

The team is half way through the two-year project. Early results indicate that, under certain conditions, the proposed approach represents a feasible and appealing economic and sustainable option.

‘The project is initially focused on an oceanic region on the West Coast – the Great Pacific Garbage Patch – as this is a baseline case prototype characterised by reliable data,’ Nikolaos says. ‘We modelled several clean-up scenarios that took uncertainties into account with regard to the surface concentrations and components of the plastic waste – something that had not been addressed before with analytical computational tools.’

The thermodynamic performance of a shipboard HTL process was evaluated to determine whether (and when) the process could provide sufficient energy to power itself plus the ship. A framework was then developed to evaluate the implications of shipboard plastic conversion on fuel use and clean-up times. The results provide valuable insights into the potential use of shipboard conversion technologies for accelerating the removal of plastics from the ocean. It is anticipated that the framework should prove useful for guiding future work in this area.

Based on this promising analysis, the team intend to evaluate the effects of additives, contaminants and ageing on HTL oil yields, and the suitability of plastic-derived fuels for existing fuel delivery systems and engines. In addition, analytical computational work will further explore certain thermodynamic aspects. Expanding the range of possibilities will involve additional development and refinement of the modelling framework. The team have also begun to investigate similar issues in rivers, such as the Danube.

‘The project is still in the early stages,’ Nikolaos flags up, ‘but it appears that economically, the HTL system is a modest additional cost relative to the clean-up vessel and boom system. Even so, one of the most difficult hurdles to overcome is convincing people that the extra cost of this environmentally friendly proposition are worth the uncertainty because of the appealing sustainability profile and energy savings. The next challenge will be to creatively structure the portfolio of the public policy responses of collecting and removing waste plastic – including the impact on marine and human health. We will have to have reliable rigorous scientific responses to inform and incentivise.’

Despite the uncertainty, Nikolaos is excited by the prospect. ‘We have an expert interdisciplinary team of wonderful people. The problem is complex and should not be underestimated; that could be paralysing, but it will not deter us from being bold. I am proud of what we have accomplished so far collaborating in a collective effort.’

‘At the moment this is only a small contribution to the solution of this massive problem, but our intention is to demonstrate the desirable advantages and then scale it up. If successful, this will advance the design of integrated shipboard collection and reactor systems that could capture and convert marine-borne plastics into useful products. Our ambition is that the project will have a global transformative impact on this otherwise overwhelming environmental problem.’

You can read the full paper on the website of the Proceedings of the National Academy of Sciences: https://www.pnas.org/content/118/46/e2107250118

This article was published in our College magazine in January 2022 – you can read Hughes issue 33 online. 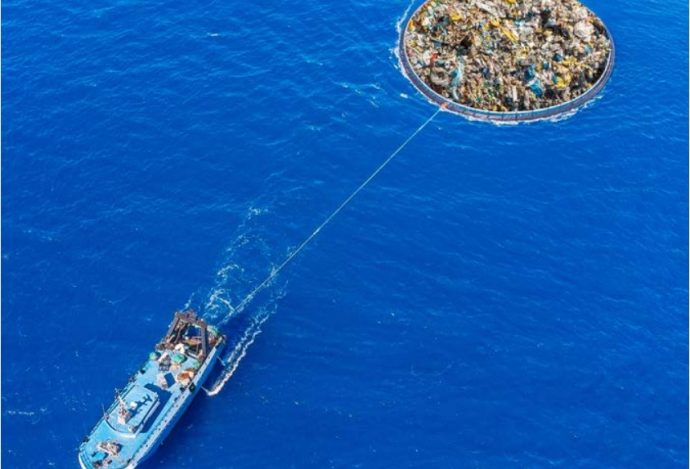