On 4 May a ceremony was held in Carmarthen, the birthplace of first principal Elizabeth Phillips Hughes, to honour her exceptional contribution to women’s education.

Elizabeth Hughes’ achievements have had a lasting impact on education in both Cambridge and her birthplace, with the foundation of Hughes Hall and later her contribution to the foundation of the University of Wales. She is recognised as a true pioneer, and the challenges she sought to overcome still resonate today. Her achievements in equality and educational freedom were touched on eloquently by Life Fellow and Hughes Hall Archivist, Dr Jean Lambert[1] as she spoke to crowds gathered outside the Spilman Hotel for the unveiling of the plaque. President Dr Anthony Freeling was proud to reveal the plaque on Miss Hughes’ childhood residence and the former surgery of her father, 36 Spilman Street. Special recognition and thanks must be made to the Carmarthen Civic Society for their efforts to formally recognise our first Principal. With 2018 marking 100 years since women’s suffrage this recognition is both a timely reminder of the struggle for women’s education and an honour to a remarkable individual, to whom we owe a great deal.

Hughes Hall’s commitment to equality and excellence sees Elizabeth Hughes’ legacy continue into the 21st century. Those who worked with Miss Hughes spoke of her care for the welfare of others, as well as her intelligence, courage and vitality, qualities that inspired her students and all those around her. After leaving Cambridge, she became a visiting Professor of English at Toyko University, and later became  one of the first people to be awarded the MBE for her work as a Matron of a Red Cross Hospital. 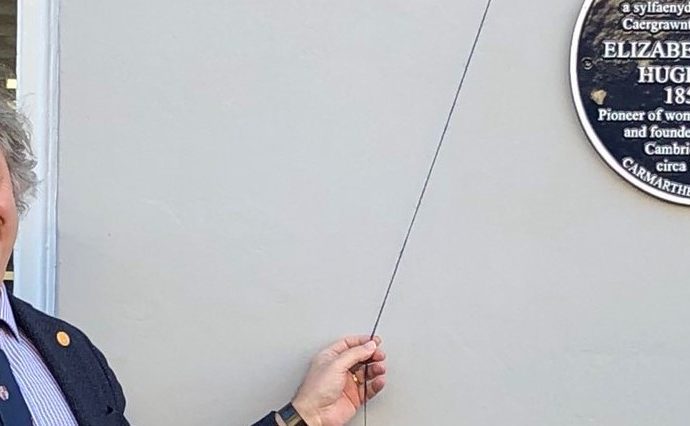