Long-time supporters and very generous benefactors Kern (Honorary Fellow) and Marnie Wildenthal returned to Hughes today to formally name the upper Fenner’s terrace in honour of Dr John Dingle and to recognise their further donation to the College.

Dr Dingle was President of Hughes Hall from 1993-1998 and steered the College during a time when it doubled in size. ‘Somehow we have managed this growth and yet maintained the atmosphere of a small college with its lively interest in every individual’ President Dingle claimed in 1995.

Today’s ceremony acknowledged Dr Dingle’s efforts in advancing the College, and his kind and generous nature, which together with his wife Dorothy (Dot – as she was affectionately known) made Hughes Hall a friendly and welcoming community. The Wildenthals, John Raffan and Tony Lemons all shared their fondest memories of John and Dot Dingle and although Dr Dingle couldn’t be at the ceremony in person, his son Jonathan Dingle said a few words to share in the joy of his father and express the family’s happiness that stemmed from their connection to Hughes Hall.

A plaque on the upper Fenner’s terrace now states: “The Dingle Terrace: This terrace bears the name of John Dingle (President, 1993-1998) and Dorothy Dingle in recognition and appreciation of their exceptional service to the College. Donated in honour of the Dingles by Marnie and Kern Wildenthal”. 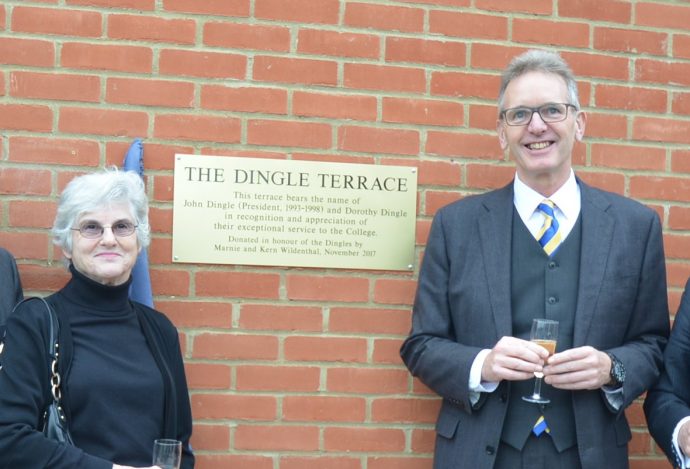