Students who study Virgil’s Aeneid at school find it significantly more engaging than other ‘high-prestige’ literature, even though they only learn tiny fragments of the text, research suggests.

“Ultimately, if this is high-level poetry that students actually like, perhaps we ought to be finding ways to give them the chance to do it” – Dr Frances Foster, Hughes Hall Associate and Director of Studies for Education.

The finding comes from a limited study with three groups of 15 and 16-year-old state school students taking Latin GCSE, and raises the possibility that there may be a case for expanding ancient literature’s use in the wider curriculum. Almost all students involved in the study claimed they enjoyed aspects of Virgil’s epic – especially the fast-paced action and mythological themes – even though they had mixed feelings about the other poetry they studied at school. Ironically, students taking Latin GCSE only ever read about 100 lines of the Aeneid’s 12 books, and the study suggests that despite their enthusiasm most will probably emerge with a “distorted” view of it. The students surveyed were, for example, only reading extracts from Book Nine, in which Aeneas, the eponymous hero, never actually appears.

The research is reported in a newly-published collection of essays, The Aeneid and the Modern World. It was undertaken by Dr Frances Foster, from the Faculty of Education, University of Cambridge, whose work explores how young people perceive the ancient world and its literature.

“If you’re a 15-year-old studying the Aeneid, what you’re actually studying is a tiny segment of one book,” Foster said. “It’s rather like watching part of an episode in a television series without ever seeing the rest.”

“If we can establish that other students enjoy it as much as this research group did, it might be worth exploring whether literature from the ancient world can be made more widely available, not least to the majority of children who never learn Latin.”

About 12,000 students in England take an ancient language to GCSE, mostly at selective or independent schools. Those taking Latin (the majority) have an option to study extracts from one book of the Aeneid. By contrast, English Literature is usually mandatory up to age 16, and covers texts which are variously branded ‘heritage’, ‘high-quality’, ‘challenging’ or ‘prestige’ – such as the works of Shakespeare. Other studies show that many students experience fear, embarrassment and low confidence when studying these, and that some leave school unenthusiastic about literature in general as a result.

Foster’s research sought to explore how students relate to the Aeneid, which is similarly seen as a ‘prestige’ text, given that they only study a decontextualised extract from it. After establishing from a survey of Latin teachers and an exam board that most teachers do choose the Virgil option, she then undertook a close analysis of three GCSE Latin groups at state comprehensive schools. Students completed a questionnaire which asked them which aspects of the Aeneid they enjoyed, if any; what they found challenging; and their views on poetry in general. Foster also interviewed their teachers, and observed lessons.

Surprisingly, all but one student claimed to enjoy at least something about the Aeneid, even though just 39% said they enjoyed studying poetry in English lessons, while most were ambivalent and 16% actively disliked it. Their favourite aspects included the fast-moving narrative, graphic and often violent plotlines and – for 84% ­– “learning about mythology”; a slightly odd result given that Book Nine is notably short of mythological features.

“Other research also suggests younger readers can’t get enough of mythology,” Foster explained. “The appeal seems to be the combination of monsters, weird fantasy stuff, and action – basically what you would find in a lot of computer games. What they seemed to like was the idea that the Aeneid is a mythological text. Their teachers had introduced it on these terms, so that was how they perceived it.”

Foster speculates that another, related reason for the Aeneid’s appeal may be that reading Roman literature often involves an immediate ‘payoff’. “Because a lot happens in the story, you get a lot of reward for struggling through it, even though the Latin is difficult,” she said. “Compare that with some English novelists, where you might slave over pages in which very little seems to happen.”

The study suggests there is a disjuncture between why teachers opt to cover the Aeneid and what students gain from it. While teachers saw it as ‘cultural capital’, Foster argues that students who only read small fragments of the poem are likely, at most, to come away knowing part of the plot, some characters, and that the Aeneid is a famous Roman poem. “What makes it distinctive – even pre-eminent – among ancient texts is potentially being lost on many of the next generation,” she writes. Teachers also reported successful lessons which connected the Aeneid to other subjects. One, for example, helped his class to understand the use of emotive description in a passage describing the death of a key character by comparing it to the work of First World War poets, as well as the final scenes of Blackadder Goes Forth. He reported that some students were moved to tears during the lesson.

Foster argues that although students only have a limited, bite-sized encounter with Roman literature through Latin GCSE, the evidence indicates that they still show signs of forming “a connection with it”.

“Obviously most children never get the chance to read it at all and there are real constraints on what schools can do to change that,” she said. “There might just be ways, though, in which translations could be introduced into English, Drama, and other subjects. Ultimately, if this is high-level poetry that students actually like, perhaps we ought to be finding ways to give them the chance to do it.”

The Aeneid and the Modern World is published by Routledge. This article is reproduced from an original article on the website of the University of Cambridge: www.cam.ac.uk/research/news/virgil-has-the-edge-on-shakespeare-in-helping-students-to-love-literature. Image credit: Aeneas defeats Turnus in the climactic Book 12 of the Aeneid, by Luca Giordano 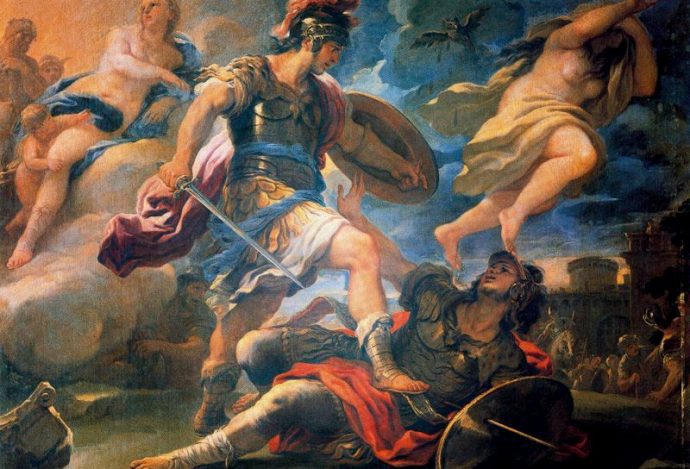