Rowing at Hughes: Bumps and beyond

Eleanor Minogue, HHBC Women’s crew and Comms Officer, provides the lowdown on Lent Bumps action, rowing at Hughes, and what’s next for the Boat Club.

Lent Bumps – back after two years 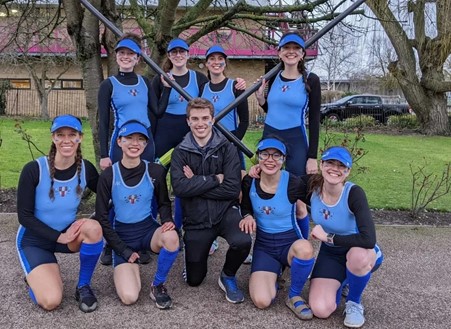 After 3 row overs, W1 were determined to make day 5 a quick race and went off fast after Newnham. After lots of whistles and a call from the Cox to hold it up, W1 thought they had finally caught Newnham before realising Newnham had in fact bumped Jesus and were no longer ours to chase. We did a quick restart and rowed the rest of the course alone. We did not envisage 4 row overs this week but are very proud of the hard work and excellent rowing on show.

Our Men’s first boat was excited to kick off their campaign, with 8 of 9 crew members setting in for their first Bumps experience. Day 1 was tough, chasing Corpus Christi while being chased down by Caius II — one of the fastest crews on the river. The crew set off and closed on Corpus fairly quickly, gaining overlap into the gut which they help headed into Grassy Corner; commentary on CamFM commended the brilliant line of cox Sam Clark, with slim margins between banks and blades as they closed into a canvas of overlap. 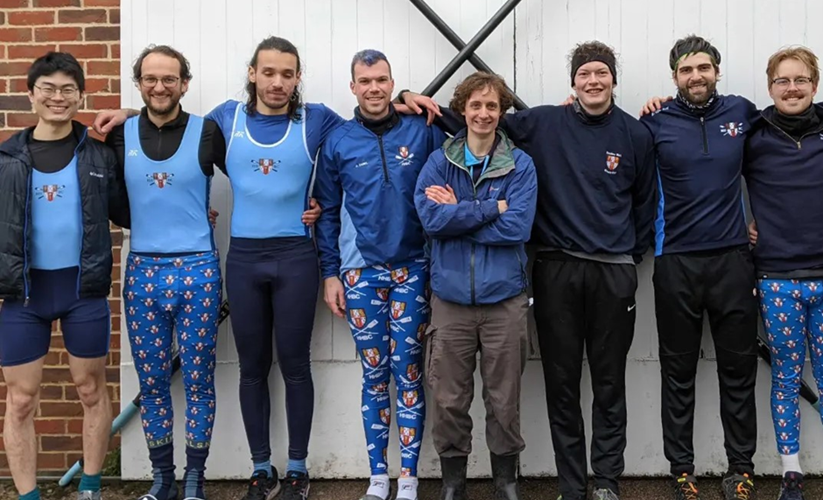 Unfortunately, Caius would edge out a bump before contact was made onto Corpus, resulting in the first -1 bump of the week. Days 2 and 3 were hard fought, but short-lived races, with the crew being bumped on first post corner both days by Sidney Sussex and Homerton. Taking this into the final day, the crew was holding on to hope of avoiding spoons – and they did! First and Third (Trinity) was quickly closing on our M1 down first post reach, the inevitable drawing closer and closer. Yet, the crew pulled out 2km of thrilling racing, with FaT making several attempts to bump, each time Hughes drawing just out of reach. Never has a rowover been so welcomed nor exciting for a HHBC crew. Well done to all; final result down 3.

Men’s second boat: the was the first Bumps campaign for the whole crew who all took up rowing in Michaelmas term. Day 1 saw M2 chasing Peterhouse II, while being chased by Lucy Cavendish. After a great start we had to stop at First Post corner due to a collision up ahead and had to re-row along with most of the division. After the restart M2 held station on Peterhouse before they pulled away and Peterhouse, Hughes Hall and Lucy Cavendish all rowed over. 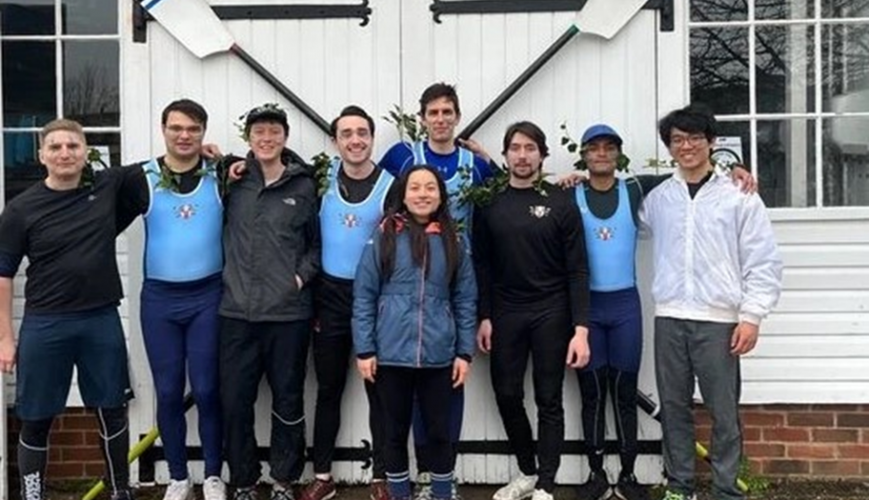 M2 comfortably rowed over again on Day 2 while Lucy chased them the entire length of the course. After a rest on Day 3, M2 started off well before a classic Bumps gathering of boats in very close proximity resulted in us being moved down two places in the rankings due to a technical over-bump. Hungry for a bump at the end of the week, and chasing Lucy Cavendish who had rowed over every other day, M2 had a whistle on Lucy By the motorway bridge before upping the power and catching them before First Post corner.

The crews and the Captain

Imogen Binnian, HHBC Overall Captain, reflected on the week and HHBC’s performance: ‘The much-anticipated return to Bumps racing was always going to be an exciting week, with it being the first Bumps experience for many of our rowers and all of our coxes. We have been so impressed with all of our crews for the hours of training they have committed this term to prepare for the races. A particular well done to M2 for achieving the bump that we all so badly wanted, and to W1 for rowing the full 2.6km course every day- one of only 4 boats in the entire competition to do so! We are now gearing up ready for the Head of the River races on the tideway in the coming two weeks, and then look forward to next term already where we hope to have a record number of May Bumps entries from HHBC. Thank you to all of our captains, committee members and coaches for their incredible work this term.”

Other races for Hughes include:

HHBC is the biggest society at Hughes Hall, and every year we welcome dozens of new rowers and coxes to the club, ranging from people with zero to many years of experience. The past few years has seen the club grow, both in size and successes. 2018 marked the first year that HHBC had an independent women’s squad, having previously run as a joint squad with Lucy Cavendish College. In 2019 the women’s side entered two boats into the Lent Bumps for the first time, where W1 won blades. The men’s side of the club has also had great victories in Bumps in the previous few years, winning blades in both May 2019 and Lent 2020.

Spring 2020 of course led to a big change in the way the club ran, with members adapting to training together virtually. We continued our virtual circuit training throughout 2020 and early 2021, until we were finally able to return to what we love most: racing on the water. We had many successes across the club throughout the last Easter term, including our mixed senior VIII winning City Sprints, NM1 and M1 winning their divisions at Xpress Head, and NW1 coming second in their division in the University June Eights Regatta (May Bumps replacement event).

More than just a sport

At HHBC we put emphasis on the social and wellbeing benefits of sport, alongside the competitive side of rowing. We believe rowing can complement academic studies by providing structure, time to decompress, and a support system of friends in the club.

In 2019 we took part in the ‘Rowing Together for Healthy Minds’ awareness and t-shirt fundraising campaign, to encourage discussion about our mental health and how we can best use sport to support it. Earlier this year we became one of the first Cambridge college boat clubs to sign the LGBTQ+ in Sport ‘Student team pride pledge’, to declare our support for LGBTQ+ people in the club and more widely in the rowing community.

We endeavor to widen participation in rowing across the whole of Hughes Hall, and are working to improve our accessibility by reducing membership fees, running learn to row courses throughout the year, and running open circuits for the whole college.

The captains and wider committee are busy planning the rowing year ahead of us, and we have high aspirations for the senior crews from both sides of the club, both on the Cam and beyond. Our lower boat captains are excited to welcome new freshers and introduce them to rowing, the best sport in Cambridge! We are also actively seeking new sponsorship in order to support the club’s endeavors in building our success and participation.

And who can forget the highlight of every rower’s year – the Boat Race – coming up on 3rd April! Although we don’t have any students on the confirmed Boat Race crews this year, the Goldie crew for the Reserve Boat Race, has yet to be announced and there are two Hughes students in contention (more on that soon!). They may also be Hughes news coming up for the Women’s lightweight boat.

If you would like to find out more or try rowing at Hughes please email the club: boatclub@hughes.cam.ac.uk.

With many thanks to Eleanor for keeping us up to date with all the news from the Bumps and beyond. 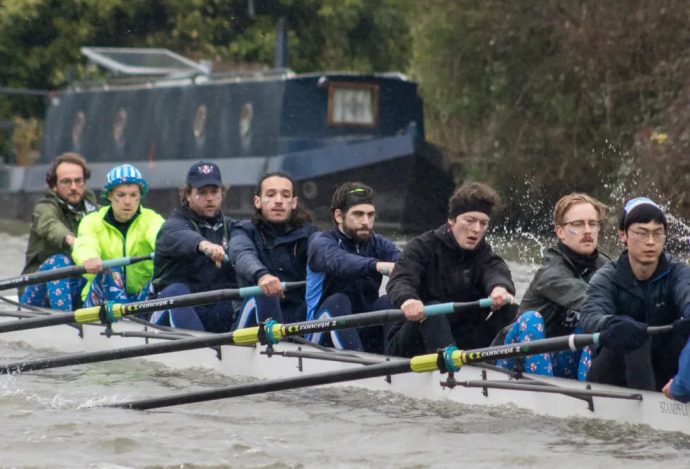