Reframing the debate about financial inclusion

Bangladeshi social entrepreneur and economist discusses the concept of social business and how he was motivated to do things differently.

Paul Tracey, Hughes Hall Governing Body Fellow, Professor of Innovation and Organisation, and Co-Director of the Cambridge Centre for Social Innovation at Cambridge Judge Business School, was recently featured in CJBS Perspectives: Leadership in Unprecedented Times, a video series that features globally prominent business leaders discussing timely and interesting business topics and themes, as well as a view on how they have coped, and even thrived, in the pandemic. He had the privilege of interviewing Professor Muhammad Yunus, Nobel Peace Laureate 2006, Founder of Grameen Bank and Chairman of the Yunus Centre, about the inspiring journey to founding the bank, the motivation behind finding new ways of addressing poverty and financial exclusion, and how the microcredit model has evolved over the last 40 years.

Professor Muhammad Yunus says he was motivated by a belief that traditional banks were doing everything backwards – including lending money only to people who already had money – so he decided to pursue an alternative path. The Bangladeshi social entrepreneur and economist founded the Grameen Bank for microcredit in 1983 and later launched the Yunus Centre, a global hub for social business.

Professor Tracey reflected: “It was such a privilege to speak with Professor Yunus about his work with the Yunus Centre and his vision for social business – his passion and energy are remarkable. I was especially struck by his comments on the mainstream financial system, in particular his point about the need to reframe the debate about financial inclusion from “are people credit worthy” to “are banks people worthy”!

Professor Yunus reflects on the concept of social business, how this can be supported by established corporations worldwide, and his economic vision for a better future. He concludes by sharing his thoughts on what business schools can do to support social business and what technology and the new generation of today can do to build a better world.

CJBS Perspectives is a series of talks and presentations from exceptional leaders, faculty and alumni, born of the challenging times in which we all currently find ourselves.

You can view this interview and other videos in the series here: CJBS Perspectives: Leadership in Unprecedented Times – YouTube and read more about the discussion here: Social mission – News & insight – Cambridge Judge Business School. 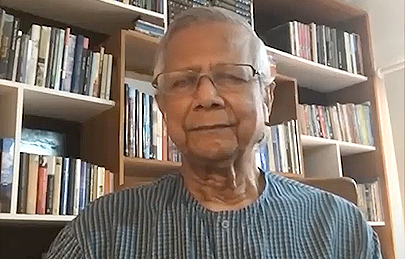