Hughes Hall is always proud to fly the rainbow flag at significant times throughout the year. During June, we are marking Pride Month and would like to take the opportunity to remind our community of its significance as well as related activities and support in and around College.

Pride Month originates in the US and coincides with the timing of the Stonewall Riots in 1969, an historically pivotal series of demonstrations by the gay community in response to a police raid on Stonewall Inn on 28th June in New York, and widespread police violence against the wider LGBTQ+ community. The term Pride was coined by Brenda Howard, known as the ‘Mother of Pride’ and a militant activist, who is remembered for her work coordinating the first Pride march in 1970 as well as advocating LGBTQ+ rights.

Pride has been adopted widely across the world, the timing of which may accommodate poignant dates in that culture or community, for example Moscow Pride falls in May to mark the anniversary of Russia’s 1993 decriminalisation of homosexuality.

Cambridge has a long history of active and engaged LGBTQ+ students, staff and alumni: student and staff networks offer social events and support throughout the year, and researchers share their work in queer, trans and sexuality studies.

Hughes Hall’s  MCR Committee includes an Equality and LGBTQ+ Officer. Jodie Rawles was elected In January 2021 to this post to support and promote inclusion and equality for the College’s LGBTQ+ community. The MCR also has an LGBTQ+ student society which is coordinated through a Facebook group.

Jodie said: “It’s wonderful to see the LGBTQ+ flag flying proudly at Hughes Hall. I’ve always found Hughes to be a strong supporter of the LGBTQ+ community, with it’s LGBT+ Formal Halls, socials, as well as it’s Equality and Diversity Working Group. The MCR also runs a student LGBTQ+ society and we would love to hear from you if you’d like to get involved, or for advice or support.”

Jodie can be contacted on mcr.equality.lgbt@hughes.cam.ac.uk. Students are also encouraged to their Tutor or the Senior Tutor if they have any concerns around equality and diversity issues.

There are over 150 Pride activities happening around the country according to  www.theprideshop.co.uk/uk-pride-calendar-2021/ but it seems Cambridge pride is yet to be confirmed. Keep your eyes on their Facebook page for updates: www.facebook.com/CambridgePride/.

Further information and sources of support 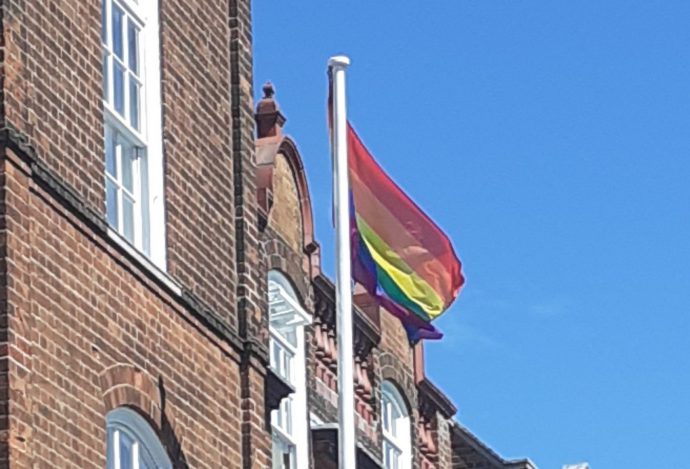