Investing in a Future World

The City Lecture, ‘Investing in a Future World’, by Russell Picot and official launch of the Hughes Hall Centre for Climate Change Engagement drew a distinguished audience on 29 October.

Speaking from an investor’s perspective on climate change risk, Russell explored the current state of play and the many challenges faced in accessing and understanding the science as well as the risks and opportunities.  He offered insight to the role that the financial sector can play in supporting positive change and the capital flows that can be harnessed to achieve it.

Russell emphasised the significance of collaboration and commented that collaborative mechanisms such as the Hughes Hall Centre for Climate Change Engagement gave people hope at an otherwise alarming time. This was echoed by Vice-Chancellor Professor Stephen Toope and Director of Cambridge Zero, Dr Emily Shuckburgh OBE who stressed the importance of the Centre for the University and the University’s own initiative as described below.

The official launch of the Centre for Climate Change Engagement [www.hughes.cam.ac.uk/the-bridge/ccce/] coincides with news that it has secured funding for a further five years. The Centre also hosts Chapter Zero [www.chapterzero.org.uk], the only network for Non-Executive Directors of its kind in the UK which has drawn almost 300 members since its inception just four months ago.

As the magnitude of the climate crisis reveals itself and the world sits at a critical juncture, the need for collaborative action is urgent. The University of Cambridge has launched Cambridge Zero [www.zero.cam.ac.uk/] to harness expertise in research and policy. Collectively Cambridge Zero working with the Hughes Hall Centre for Climate Change Engagement and Chapter Zero will provide an effective partnership that should make a very real difference in our attempts to tackle climate change challenges. 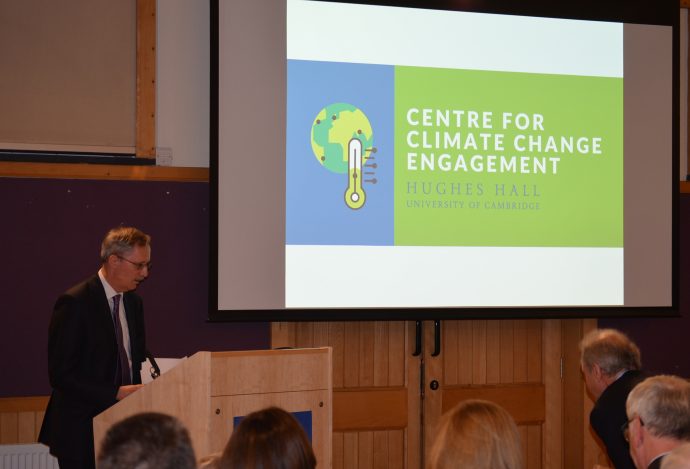