Hughians at the 2019 World Rowing Championships!

It’s great to see some of our students this year at the 2019 World Rowing Championships in Linz, Austria.

On the left is Dara Alizadeh. He is a current Hughes Hall student studying Education, Policy and International Development. He is taking a year out of study to try to qualify the single scull for Bermuda (he has a multi national heritage). He finished 40th out of 44 nations at the World Championshipls last week in Linz. This was not good enough to qualify directly for Tokyo but very good experience. He has rowed to a high level in the past but sculling is a very different discipline. He now has an opportunity to qualify at the Americas Continental Qualification Regatta (Rio de Janeiro, BRA) in May next year. He has to finish in the top 5. He has now moved to Boston, MA where he will start training and then head to Sydney to train with University of Technology Sydney. Dara was president of the CUBC last season and won the 2018 and 19 boat races.

In the middle of the picture is Pat Eble. He studied Business Management in the 2016/17 academic year. His undergraduate study was at Princeton University. He made the US National team in the 2017 season right after graduating. He won a silver medal in the 8 the same year. He has been the in US 8 each year since, finishing 4th last year and 5th this year.

The 5th place finish at the World Championships last week was sufficient to qualify for Tokyo. The challenge now for Pat is to maintain his seat in the crew ahead of the Games.

Both are huge ambassadors for Hughes Hall and the University as well as keen supporters of the college boat club.

Steve Trapmore is on the right of the picture and is a Senior Member of the college.

He was Chief Coach of the CUBC from 2010-2018 after which he accepted a role as High Performance Coach with the GB Rowing Olympic Team. He still live in Cambridge but work day-day at the GB Rowing HQ close to Reading.

The pic itself was taken at the 2019 World Rowing Championships in Linz, Austria on Sunday just after racing had finished. 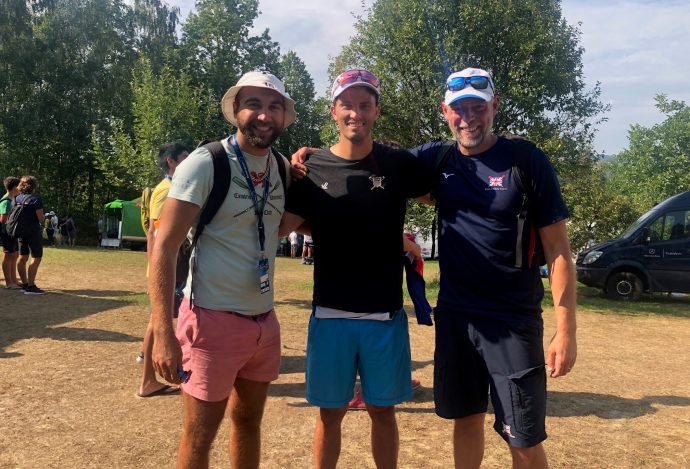