In a ceremony on Saturday at Emmanuel College boat house, Hughes Hall christened a new elite Stampfli eight which will be used by the club’s top crews in the upcoming Bumps campaign.

In recent years Hughes Hall Boat Club (HHBC) has held an extremely strong position on the river, winning the Pegasus Cup three times, an accolade no other Cambridge College has achieved, and the Michell Cup twice[1]. Amongst HHBC alumni is world rowing champion Tom Ransley who competed in the Rio 2016 Olympics to win a gold medal for the British crew in the men’s eight, two recent Cambridge University Boat Race Captains, Henry Hoffstot and Lance Tredell, and Rosemary Ostfeld, the Cambridge cox from the memorable 2016 Women’s Blue Boat Race. In addition to this, four Hughesians competed at the 2017 World Rowing Championships, where Patrick Eble (2016) took home a silver medal and Ben Ruble (2014), who rowed for USA, placed fourth in the B final. Hughes Hall rowers also made up more than half of the Cambridge Blue boat in the Boat Race last year.

The acquisition of the new boat is the result of generous support from Hughes Hall alumni and friends following the death of Hughes Hall Development Director, and HHBC supporter, Richard Berg Rust who began to raise money for the project shortly before his passing.  Former boat club President and Men’s Captain, Andrew Stark, remarked “This new boat fills a longstanding need to provide the best equipment for the overwhelming number of world-class, university rowers that HHBC has and continues to attract year-on-year.”

Current boat club President, Nazhif Zaini, commented “With the rapid rise of HHBC up the ranks in the University Bumps, having an elite boat to match the increasingly experienced and competitive rowers is advantageous for continued success. We are truly honoured for this new addition.”

The new boat has been named ‘Duke of Aymer’.

[1] The Pegasus Cup and Michell Cup were jointly awarded to Hughes Hall Lucy Cavendish College Boat Club, as the boat clubs were joint until September 2017. 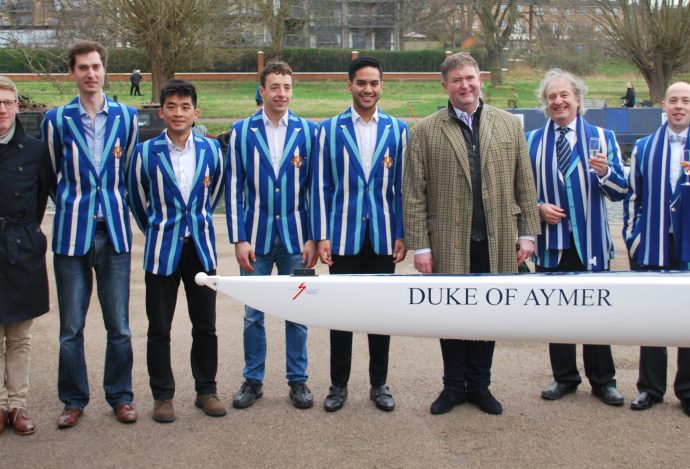