In this post we bring you more of our Black History Month heroes, as nominated by staff, students and seniors from across Hughes Hall.

Do you want to nominate your hero for Black History Month? Send your submissions to Jack Clarkson on development.admin@hughes.cam.ac.uk

His most prominent role came in the Marvel film Black Panther, in which he played the lead role. He won numerous accolades for the role.

“Dr. Angela Bowen was an American dancer, writer, professor, lesbian activist, and the academic mentor responsible for my understanding that — to borrow from bell hooks– feminism is for everybody.

A gifted dancer, she toured with a jazz troupe which brought historical moments in African-American culture to theatres across Europe. In the 1960s she opened a dance school in the racially and economically divided town of New Haven, Connecticut, inspiring a generation of young black dancers who saw their potential reflected in her teaching.
She came out as a lesbian and pivoted to political activism in the 1980s, undertaking a doctoral thesis on the life and work of Audre Lorde, and moving to Long Beach, California where she dedicated the last decades of her life to writing, teaching, and organizing in LGBT, BIPOC, and disability activist communities.

Committed to passing on her activism to her students, my own work is indebted to her insistence upon critical self-awareness in comradeship, and her commitment to joyful movement as political praxis.”

Kendrick Lamar – “I would like to nominate the rapper/poet/artist/writer/musician Kendrick Lamar. I am a third year EngLit undergrad here at Cambridge and am currently writing my disseration on Kendrick Lamar’s album To Pimp A Butterfly.

I am constantly and deeply moved by his piercing clarity of thought and stunning imagery.

Ti’Air Riggins – Biomedical scientist and researcher who also does a great deal of community work including promoting STEM subjects to underrepresented groups.

Sojourner Truth (1777 – 1883) – Sojourner Truth was an abolitionist, women’s rights activist in the USA and advocate for prison reform. Born into slavery, she became an enigmatic speaker, making a number of famous speeches including “Ain’t I a woman?”

Angela Y Davis – African American Scholar and activist specialising in issues of race, gender and class and more recently is a leading voice in the global ‘prison abolition’ movement.

Marcus Mosiah Garvey – Jamaican born Leader of the Pan-African movement. He founded world renowned organisations and publications with the aim of the social & economic advancement of people in the African diaspora. Jamaican National hero.

“These are three people that have had a profound impact on the world, their communities and on me personally.”

She founded the Green Belt Movement which planted 30 million trees and trained tens of thousands of women in forestry and food processing, allowing them to earn their own income.

She received the Nobel Peace Prize in 2004 for her work (the first African woman to do so). And she squeezed in time to study for a doctorate in biology and was the first female professor in Kenya.” 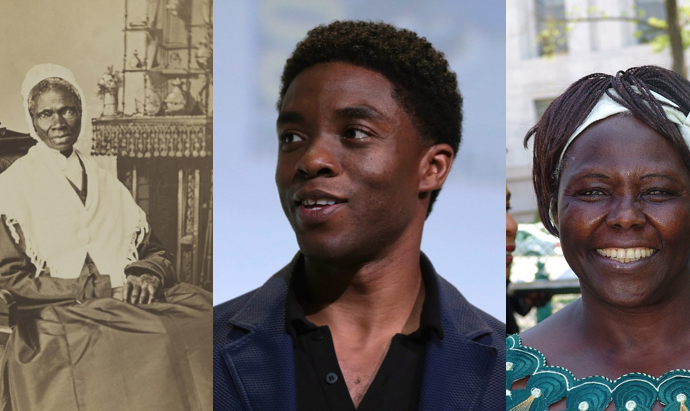