Hughes Hall’s Centre for Climate Engagement (CCE) hosted a three-day visit to the University of Cambridge by Nigel Topping, the UN High Level Champion for Climate Action, to showcase the range of research and initiatives supporting a zero-carbon world. Nigel marked the first day of his visit by addressing an audience of students at Hughes Hall, where he spoke about his role as UN Champion for Climate Change, solving the brutally complex climate crisis and the opportunities and challenges from COP26.

“Tackling the climate crisis is a wicked problem that is sometimes seen as beguilingly simple,” said Nigel Topping, UN High Level Champion for Climate Action to students at the Centre for Climate Engagement event at Hughes Hall. “All we need to do is stop using fossil fuels, and pay the global south so that they can develop beyond reliance on fossil fuels and tackle the adaptation needs? But it’s also the most brutally complex problem in the world because it means transforming the energetic basis of the entire global economy. It’s just as disruptive as the Industrial Revolution, and we have to do it much, much faster.”

The address to students followed a welcome from Dr Tori McKee, Senior Tutor at Hughes Hall, who said: “One focus over the last five plus years at Hughes Hall is around research, translation and impact. Our Bridge Centres look at exciting, important and relevant issues and the Centre for Climate Engagement has become one of the really significant and consistently growing centres within college. It is under their umbrella that we have the pleasure of welcoming Nigel here this evening.”

Need for non-state actors to address the climate crisis

Opening his address, Nigel explained how the mandate for the High Level Climate Action Champion for the UN emerged as part of the Paris Agreement in 2015 at COP21, when the UN system comprising 196 countries (now 197) agreed that the climate crisis could not be tackled through government alone. “It required non-state actors, including large and powerful businesses such as Apple and Amazon, as well as banks and investors that also hold more sway than many nation states. It required sub-national governments along with cities such as Mexico City and Tokyo that are huge economies with their own regulatory power and cultural momentum – but had no seat at the table.”

Appointed UK High Champion ahead of Glasgow’s COP26, Nigel worked with the Chilean (COP20) High Level Climate Action Champion, Gonzalo Muñoz. Gonzalo’s 2019 appointment ahead of COP25 in Santiago, Chile, was timely following the failure by parties at COP24 in Poland (December 2018) to agree upon the science presented by the Intergovernmental Panel on Climate Change (IPPC) report outlining the consequences of 1.5 degrees, published in October of the same year. With only months to go before COP25 in Chile, Gonzalo was instrumental in putting this science front and centre, winning the agreement of the non-state actors to publishing a pathway to 1.5 degrees for every sector of the global economy.

The address brought focus to COP26 and its legacy as a success or failure. Nigel argued that both perspectives are true – and it is important not to lose sight of either. He said: “There’s real acceleration in momentum, problems are being solved, and there is much more ambition and urgency. We’re not, by a very long way, on the trajectory which gets us to 1.5 degrees in a resilient way. There’s lots of very valid reasons for scepticism, which means that holding those accountable to their commitments is going to be really important.”

Speaking about the role of scepticism, Nigel cited the speech by climate activist Vanessa Nakate when she addressed delegates at COP26. “Those are the words that are most seared in my memory coming out of Glasgow. She said she did not trust all the pledges and promises – but she pleaded to ‘prove us wrong,’” he said. “My job for the next eight months in this role is to prove that legitimate voice of scepticism wrong, and make sure that the momentum eventually meets the size of the challenge – and the need for us to act much, much faster to get to a resilient Net Zero future.” 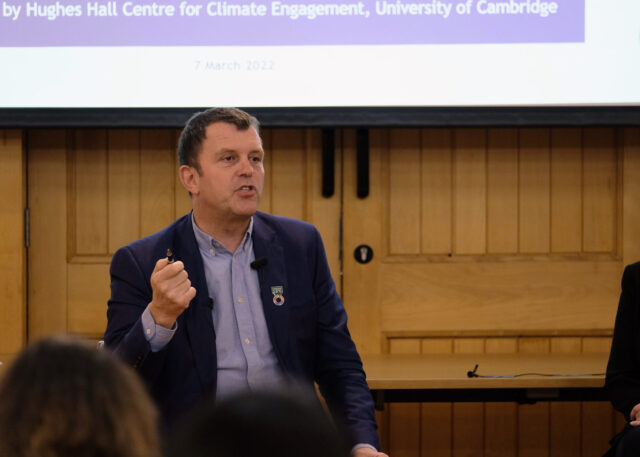 “Tackling the climate crisis means transforming the energetic basis of the entire global economy. It’s just as disruptive as the Industrial Revolution, and we have to do it much, much faster.”

Looking to the future

Closing his address to the students, Nigel looked to the future: “On the one hand, I would encourage you all to be really, really patient. And on the other hand, to know that you’re going to have a life of working on wicked problems. I think it’s much more exciting to be working on a collective project, which is not just about self-enrichment, but a map making the world a better place. I know that most of you are already working on being part of the solution to the wicked problem, and I wish you all the best of luck – because we need all hands and minds on deck.”

Emily Farnworth, Co-Director of the Centre for Climate Engagement, opened the Q&A session by asking what he hoped the audience would take away from the event. Noting that many of the students in the audience would one day be in positions of influence, Nigel said he hopes they are prepared for lives of impact to meet the needs of society and to solve problems to make a better world for everyone. During drinks and networking, a number of students reflected on the event.

Valentin Gulyas, who is studying Psychology (MPhil), said: “I don’t know too much about the global discussion about climate change, but I know it is a big problem and I want to educate myself on the topic. The way Nigel talked about having to make policy changes based on negotiations between so many nations and non-state organisations was very interesting. Everyone bears a responsibility to make changes.

“Nigel said we are privileged to be studying here and it is our responsibility to bring forth change in the world and have a vision of how we can create impact for the greater good rather than just work to further ourselves. Every one of us to make a difference. I hope to start my own company one day and coming to this talk made me think about having a positive climate impact in what I do. Before coming to the talk, I thought more that this was a problem for big corporations and nations but it is also down to the small business owners and each and every one of us to make a difference.”

Juliane Knebitzsch, who is studying Environmental Policy (MPhil), said: “I really liked Nigel’s appeal to be ambitious with our research questions and not to stop at ‘what is wrong at the moment’ but ‘how can we do better’ – even if it is only an incremental step. That is what I am taking away from the talk – the ideas to go one step further. It is really motivating. His talk was not saying everything is bad and we have lost the battle with reaching 1.5 degrees, but that there are still possibilities.”

David Boroto, who is studying Engineering for Sustainable Development (MPhil), said: “In my course we have had a lot of discussions about COP26 asking, similarly to some of what Nigel was talking about tonight, was it a success or was it a failure? I was interested to hear thoughts from someone who is in the belly of the beast and played a part of those discussions.

“His thoughts on the main UN negotiations between member states were interesting, and how tough those negotiations are due to the high bar for consensus needed for any agreement to be reached. I think this was apparent in some of the outcomes from COP26 with the language being watered down and some of the agreements not going as far as the public and civil society may have wanted. I also found his framing of the solutions interesting. Instead of saying we need to reach a certain target or commit to certain actions, he explained how set pathways for each of the different sectors were proposed. Calling for ambition within that framework was important to see how far we can go if we put our heads together. That positive framing made the difference to how it was received. I find that distinction interesting – the role of the private sector and how that perspective and innovation can flip things as opposed to the bureaucracy and negotiations of the public sector. I think you need both and I think I have sometimes failed to see the importance of the dynamism and entrepreneurship in the private sector. Hearing Nigel’s perspective was very interesting.”

Watch a recording of ‘An audience with Nigel Topping at Hughes Hall’ on the YouTube channel of the Centre for Climate Engagement here. 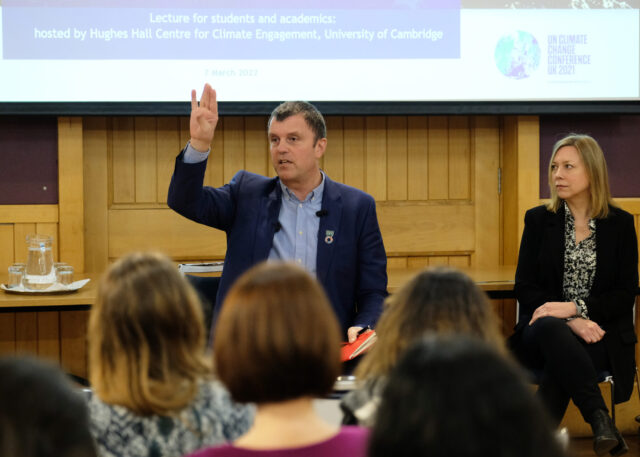