In this first edition of ‘Alumni Spotlight’ we meet Arunima Hoskote, an Economics graduate who has gone on to forge a successful career in writing and editing. Prior to studying her MPhil in Economics in Cambridge, Arunima was a student at Mumbai University.

“My time at Cambridge was wonderful. I was on a prestigious scholarship and it was my first time abroad. The first few days were a bit frightening as if I had dived at the deep end of the pool and learning to swim there. But gradually I started enjoying the freedom and valued the independence. I became self-reliant in no time. I am glad I went to Hughes Hall since it was a graduate college and had a close-knit group of friends.

“The Cambridge experience is unlike any other in the world. Not only is a student enrolled in the best departments and faculties in the world, but their respective colleges ensure they receive a very holistic education and develop an all-round personality.

“So while I was learning to swim at the deep end, I enjoyed studying as well as the exposure to one of the best universities in the world. I joined the walking club and the India society. I made a walking trip from Kent to the white cliffs of Dover with the walking club and the first glimpse of the English Channel from the top was a magnificent sight to behold.”

“I lived in Hughes Hall college accommodation, which was a house I shared with another MPhil student. Fortunately for me, they clubbed me with her, and she was a vegetarian too. We got on really well and the college accommodation at Hughes is so comfortable that I got over my homesickness really quickly. Hughes Hall was also famous for its food and it offered the best vegetarian food I have had in Cambridge. I started enjoying being a vegetarian thanks to Hughes Hall culinary staff and am very grateful for that.”

“I have many favourite memories but primary among them are the trips I could make to other countries. I made a trip to Scotland with friends and fell in love with Edinburgh. I also visited Stratford-upon-Avon and loved it again. We had studied Shakespeare during school and college but to actually visit his birthplace and see the house he lived in was a great experience.

“Punting on River Cam is a very traditional Cambridge experience worth enjoying.”

Since leaving Hughes Hall, Arunima has worked in the writing and editing industry – with newspapers and financial companies. Her writing work spans the creative side – where she has lent her creative writing expertise to some big brands in India in the banking and finance space – which includes writing for corporate and marketing communications, HR teams, CEOs, CFOs, MD speeches.

In 2015, she set up a firm called What’s the Best Word, which works with corporate clients in the writing space. A big part of this venture involves conducting courses and workshops for her corporate clients.

“I enjoyed working in a newspaper environment – and the rest of it sort of happened by default. I love writing and love what I do. Whether it is training analysts to write or composing a C-level speech, I absolutely enjoy the process.

“My higher education in research has definitely helped to a large extent and given me an edge because I am able to grasp matters pertaining to various industries faster and bring it out in my writing. So while a lot of the work has been in the financial domain, I am equally comfortable writing for corporates from other industries such as pharma and technology and I have even had a university for a client. I also work for research clients.”

In recent years, Arunima has ventured into travel and heritage writing, traveling a lot around India and documenting as much as possible.

She has since launched a digital magazine called India Beckons – which is primarily aimed at travellers looking to travel to India. The magazine has an international section as well, to which many people from various parts of the world, especially the UK and America, have contributed.

She has also released a book on the best heritage and travel stories in the magazine called Heirloom Treasures: The Cultural Tapestry of India.

“My fondness for travelling and chronicling as I go along is what led me to start this digital magazine. Travel is absolutely one of my passions. I have travelled widely in Europe, the UK, India and some other parts of the world like the UAE, Singapore and Malaysia.”

Recommendations for travellers to India (and food to try!)

“There is so much to see in India that even if you travel non-stop for one year (as I have done), you would barely be able to see only a fraction of it. Personally, I would recommend the Golden Triangle to first-time travellers to India – that is Delhi, Jaipur and Agra (it’s a must). Travelling down South would be an amazing experience as well and show a very different face of India than travelling up north. The east is quite beautiful as well – discovering the history and heritage of Kolkata, Shillong, Darjeeling tea estates would be an absolute delight. The western coast offers some of the most amazing beaches and coastline.

“Food recommendation to be honest depends on whom you are recommending it for. Traditional Indian food can be very greasy and there is a plethora of foreign cuisine restaurants in India now which cater to local foodies as well as foreigners. But do try traditional cuisines of Rajasthan, Gujarat, Punjab, South India and so on. Though I must throw in a caveat here that traditional Indian food can be spicy, so you ought to tell the kitchen staff to keep it mild. You could try the famous restaurants in cities or the roadside dhabaas (food outlets), which make some of the yummiest Indian food there is. “

Arunima has also published a book of her poems, Ellipses, an anthology that ‘evokes, provokes, questions, demands, suggests, reminds, and conjures up the mundanities of everyday life in an extraordinary manner.’

“I had been writing for a few years but the culmination happened in London when I attended a Masterclass in poetry. Following this, I released my book of 20 poems. I have written a lot since then but not much of poetry. I am focusing on coming out with a book of short stories and working on that at the moment.”

Both of her books are available to purchase here.

Plans for the future

Arunima is working on three more books at the moment – one is a travel book, which should be out soon, the second is a book of short stories, which she plans to release by early next year, and the third is a book on Indian festivals.

She has also had one of her short stories selected for publishing by a reputable Singapore based journal. The Elephant Ride can be read here.

Apart from her writing, she is also a yoga practitioner and teacher. In recent years, she has done courses in Mindfulness, Meditation, and Yoga in India and the UK and gained teacher training qualification as a yoga teacher. She also loves cooking, travelling, writing, reading, yoga and mindfulness meditation and is also a student of Hindustani classical music (vocals). 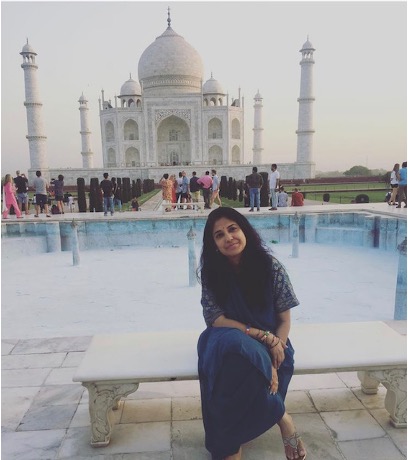