Who Will Remember When Holocaust Survivors Can No Longer Tell Their Stories? Carrying Testimony from Generation to Generation

Holocaust Remembrance Day commemorates the millions of people who died during the Holocaust, under Nazi persecution, and is an important reminder to respect one another, and to oppose prejudice and discrimination wherever it can be found today.

It is held every year on 27 January, the anniversary of the liberation of the Auschwitz-Birkenau concentration camp.

To mark this significant day, Samuel Buckstein will tell the personal and inspirational story of his Grandfather Oscar Zaretsky.

Samuel’s Grandfather survived the Holocaust  in eastern Poland. He and his siblings were orphaned when the Germans invaded the Soviet Union and spent many months alone in the forests, perilously clinging to life. After the war, Oscar came to Canada as a refugee and was adopted by the Zaretsky family in Winnipeg. He settled in Toronto and built a family and career. Oscar’s life is an inspiring story about catastrophe, perseverance, luck, and survival.

Samuel Buckstein is a Hughes Hall MPhil student, and founder member of the Carrying Testimony Project – a charity whose aim is to continue holocaust education when the survivors can no longer tell their stories. 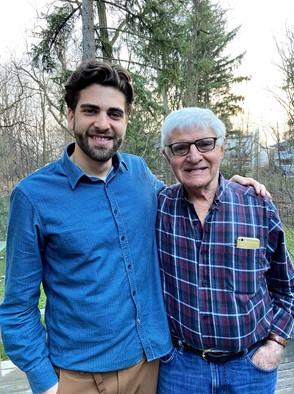