This time last week, crowds gathered along the Cam to cheer on their College crews in what the BBC described as ‘the boat race with a difference’.

May Bumps started with a bang (literally). As the starting cannon went off on the first day, Hughes had 2 Men’s and 3 Women’s crews qualified to compete in this 4-day race. Here’s the updates day by day:

W3 kicked off the final day with a strong showing against Christ’s W3, catching them early out of the gate and handing them spoons! A wild ride this week saw them finish up 3 spots.

M2 was up next, looking to take Caius M3’s blades away from them. By the time they got to Grassy, it was an eerily similar situation to Lents with boats pulled in around the corner and a crew jackknifed on the far side. However, M2 manoeuvred deftly through, closely followed by Catz, walking away after Catz crashed out going for the Bump (0+).

W2 finished their campaign in style. Christ’s was in the Hucy crosshairs again, catching their W2 just past the Motorway Bridge and in full view of the cheering Hucy college party on the bank. They superbladed to glory, ending with an incredible +6!

W1 came out determined as always, chasing down Selwyn W1, handing out yet another set of spoons for the club, and moving ever closer to the coveted Mays 1st division with a +2 finish!

M1 was primed to claw their way back on Saturday, in spite of yet another substitution. While looking cleaner off the start than they had all week, Eddies M1’s ‘go for broke’ mentality ultimately won the day, emptying everything they had into a 400m sprint, catching our guys before first post (-3).

W3 started off strong, but ultimately failing to bump Homerton W2 whom they passed with their legendary overbump and a half the first day.

M2 followed next, set to chase down King’s M2 with the best start they’ve had so far. However, a crab before First Post Corner made it not to be, with a Bump from Caius M3. M2 was back to +0.

W2 continued their campaign towards blades, knocking our boathouse mates down a peg. They finished the day at +5!

W1 came out valiantly. W1’s determined attitude was on display, riding up on Darwin W1’s tail before Darwin caught a spooning Selwyn (+1).

M1 fought their way on to the long reach, fending off a well matched Homerton until ultimately being bumped.

W3 started off the day, riding the wave of their almost unheard of 1.5 bump! They chased down Christ’s W3 before 1st post corner, bringing their total change to up 5 spots!

M2 followed next, set to chase down King’s M2, their foil from Mays 2015 (M2 rowed over against them Days 2 & 3 last year). After a more controlled start today, they fought off a revenge push from Clare Hall M1, and pulled within 3/4 of length, sticking with King’s until the reach but, ultimately, rowing over.

W2 continued the success of the day, chasing down Jesus W3 in a rerow–giving everyone at the Plough something to cheer for as they caught them for the crowd!!

W1 came back with a vengeance after the first day to go up one, by knocking off Robinson W1–setting themselves up again for a rematch from Day 1 against Darwin W1.

M1 put up a valiant fight, chasing Fitz again all the way to Ditton Corner, where the more seasoned Wolfson M1 caught up with them before they could open up on the reach.

W3 started off the day. Not being deterred by a bump and technical row over awarded in front of them, they fought on to get a 1.5 over bump on Sidney W2, moving up 4 spots!

M2 followed next. After a scrappy start, they continued on, bearing down on Clare Hall M1 as they crashed into Grassy Corner, and being awarded an overtaking bump!

W2 continued the craziness of the day, over bumping on Pembroke W3 between the Plough and Ditton Corner!

W1 & M1 rounded out the day with strong row overs–in spite of M1 needing to swap a rower at the last minute.

More photos of May Bumps are available on our Hughes Hall Facebook page. 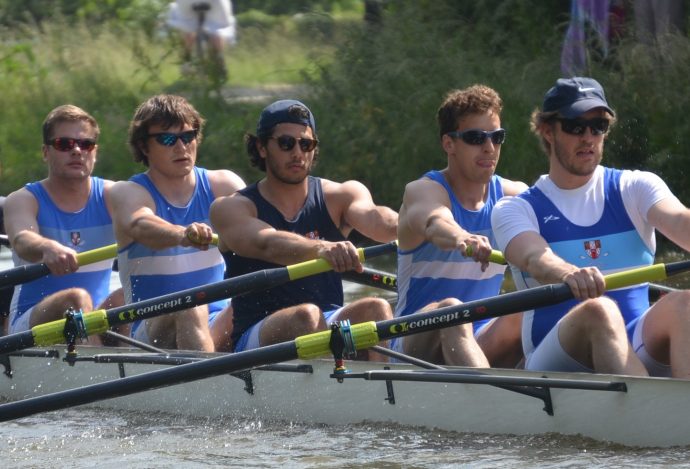